The Explore Africa Today webinar began at 2 PM with a virtual audience, joined by the live-event exploration of Africa at 3 PM. During the hour’s preparatory session, Steve Dembo provided us links that provided background insights and preparatory information to enhance our experience when the live expedition begins in the Republic of Benin. Five excellent videos on education, environment, arts and culture, media and politics, science and technology provide a solid basis for this event. But first, you need to complete the free registration to view the videos. Another great resource is the Teach Africa Today site. 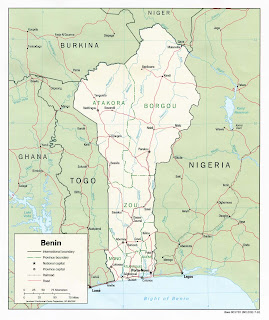 Our special guest joining us today is His Excellency Cyrille Segbe Oguin, Ambassador to the U.S. from Benin, who will bring the diversity of the country, its people and cultures to life in an open, interactive discussion at Discovery Headquarters in Silver Spring, MD.

The pre-webinar introduction was given by Dr. Gail Ifshin, President, Discovery Channel Global Education Partnership, followed by Bernadette Paolo Esq., President and CEO The Africa Society of the National Summit on Africa. The goal of this webinar is to prepare today’s youth to be the ambassadors of tomorrow’s future on the continent of Africa by educating today for tomorrow. How does Africa impact our daily lives? Africa is the cradle of civilization, providing gas, coal, chocolate, and our President Barack Obama. Deb Atwood, Director, Public Affairs and Public Policy Mars, Incorporated, in addition to addressing us live, has provided a complimentary bag of gifts to the people at Silver Spring (and it includes chocolate). Having spent over 35 years educating others, Dr. Sarah Moten, Chief, Education Division USAID, African Bureau is the reason we have this webinar today. According to her, Africa is the world, and we may live elsewhere, but Africa is the world. Moten credits the audience of young students in the Silver Spring audience for their participation. Moten notes that Teach Africa is not a program; it’s a movement, because we are correcting them and teaching them about Africa. We learn about Africa and we become the teacher, correcting misinformation, and our role is to teach and learn with and from young people on African issues, which means we are also working on United States issues. We are, in fact, connected globally, and every day we should learn something different and new about Africa and share it. “We are in this not because it is a job, but because it is our life.”

His Excellency Cyrille Segbe Oguin began his presentation by expressing his gratitude for this program and the young people in attendance live in MD. Ambassador Oguin believes that American youth can make a difference for Africa through educating beyond the information gap in America. Looking at a map of Africa, the challenges and the potential is clear and promising as its population continues to grow. Africa occupies one-sixth of the land mass of the world and three times the states of American, and the second-largest continent after Asia. Today, Africa’a abundance makes it a great place for investment. Resources for cell phones come from Africa, but the origin of man is in the cradle of civilization, Africa. In addition, Africa has a huge range of animals, the world’s largest combination of density in animals, landscapes, highest mountains (Kilimanjaro) , longest river (Nile in Africa).

According to Oguin, the letter:
A in Africa stands for amazing
F stands for fifty-four countries
R stands for richly-diverse society
I stands for information gap
C represents the cornerstone of economic growth and opportunity
A stands for A continent with the greatest challenges.

Africa has many languages–20% of world languages and diverse forms of music. A wide variety of religions exist in Africa, from voodo to Hindu. Today, Africa is seen as a place of great growth rate, with amazing opportunities for investment in another country. It does, however, face a number of challenges, among them illiteracy, poverty, diseases, HIV and malaria, war…. But the good news is despite the challenges, it is still the most fascinating continent in the world. So, Ambassador Oguin wants the youth to learn more about Africa.

Benin was formerly known as Dahomey, and is similar in size to the state of Pennsylvania. It was the first place in Africa to move to democracy without war. The current President, Dr Boni Yayi, elected in 2006, is a political outsider and independent. The people are joyful and open and the culture abounds in a variety of food and handicrafts.

Q & A with Ambassador Oguin:

This wonderful webinar ended with a story with a moral. A man comes upon a farmer with chickens. The man notices that one of the barnyard chickens is not a chicken. The farmer insists it is a chicken. After all, he has been a chicken farmer forever. The man purchases the “chicken” from the farmer, takes it to the top of the highest mountain and says, “Soar, eagle, fly.” And the eagle does. The message is so simple: we need to help all our students soar. Teach Africa today.