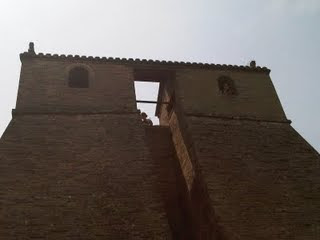 Guest Blogger Heather Sullivan‘s post from the Gaocheng Astronomical Observatory in the Heneng Province, China. Heather has created a science lesson and quiz. If you complete the 3 questions by posting a comment to her blog, you will be placed in a random drawing for a special prize from China.

As a science teacher I feel duty bound to post at least one science lesson for you guys, so here it goes 🙂

Yesterday we visited another amazing historically significant place on our journey- Gaocheng Astronomical Observatory in the Heneng Province- the oldest surviving observatory in China.

Chinese astronomers are also credited with the earliest known map of the stars. Created sometime around 700 AD, it includes precisely drawn representations of over 1000 constellations.

One especially important astronomical tool in early Chinese astronomy was the gnomon- an object whose shadow is used to record the changing position of the sun. Many people feel that the gnomon we visited at Geochang is the most remarkable one ever constructed. It was created by the famous Chinese scientist, Guo Shou in 1279 AD to help determine the calendar dates associated with the four seasons and to help verify that Luoyang City (next to Geochang) was the center of China. He was assigned that duty by the Emperor who wanted Luoyang to become China’s capitol city- a request that many around him did not agree with, so he had to establish a VERY good reason to support his desire. Since the Chinese at that time regarded China as the only country in the world, if Luoyang could be determined the center of China it would also, by default, become the center of the Earth- a very holy bestowal.

At noon on a clear day the gnomon’s horizontal bar casts a shadow on a low stone wall that extends out from the center of the base of the gnomon tower. The wall was designed so carefully that it even has troughs carved throughout so well water could be added to check for levelness!

As the sun’s path through the sky changed over the year, the location of the bar’s shadow shifted along the wall. At the winter solstice, when the sun’s path across the sky is as low as it’s going to get all year, the shadow reaches out to its farthest point on the wall- vice versa for the summer solstice. When the shadow falls mid-way between these two points, the Autumnal and Vernal (Spring) Equinox can be determined. Guo Shou used the gnomon, along with other tools at the observatory, to mark the beginning and end of all four seasons AND to give the Emperor proof that Louyang was indeed the true epicenter of China.

That’s it- lesson over! Now for you test…

1. Can you find the gnomon bar in the picture above? Where is it?

2. What is your favorite season? Why?

3. Was Guo Shou’ assertation about the center of China correct? How do you know? Please explain.