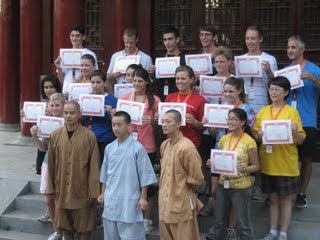 Kudos to Team China! We worked incredibly hard over the past three days preparing for our kung fu performance at the Shaolin Temple. The group was told on Tuesday that we would perform in front of students from the Shao Lin Martial Arts School and Warrior Monks. That was all the motivation Discovery Students and Teachers needed. We had to perform with precision and perfect execution. Would we succeed? 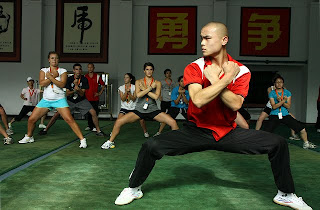 Two days into preparation it became apparent that kung fu is a lot harder than it looks. Many of us could of used a hot tub and a good masseuse. Trying to memorize the routine was like cramming for an economics test at the last minute. Not easy! Mr. Harvey and some boys were found in the lobby with a digital camera going through each step with the master trainer as they watched on video. You could observe many students and teachers off to the side practicing their form as they waited for their rotation. To complicate matters, some of our trainers were Shao Lin Temple Martial Arts students and some were Shaolin Temple Warrior Monks. The routine was similar, however some rights became lefts and some kicks became punches. (BTW, say “Warrior Monks” out loud… then add the words “Kung Fu.” Sounds so cool!) 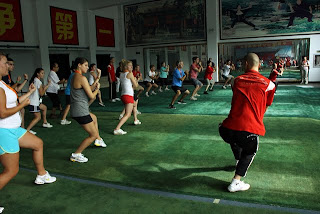 Half way through the process, Mama Ping recognized that Team China needed a break. She arranged a performance from some of the students at the school. Their discipline and execution were flawless. The students at the Shao Lin Temple of Martial Arts put on a show that both impressed and energized Discovery Students and Teachers! Thank you Mama Ping. Would ten total hours of training, hard work, sweat and patience pay off? 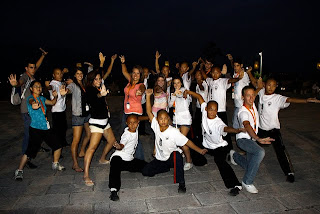 On the final day of kung fu training we received our Certificate of Shaolin Kung Fu Experience. We had to perform in front of two Warrior Monks to earn our certificate. This would be the first of two times I would feel nerves in my stomach. Three hours later, it was time for us to execute with precision and grace in front of our audience. We lined up in four rows. It was a surreal experience standing in front of the experts. The nerves kicked in for a split second. Then, I realized our performance wasn’t about perfection. It was about celebrating achievements. Each group of students from Discovery, Shaolin Temple, and Shao Lin Martial Arts School took turns singing, dancing, and performing kung fu. The night was a party and applause sounded throughout the building!

All three groups rose to the occasion. There was a sense of community and you could see the bond between children, teachers and staff. Discovery Students performed the entire routine like true kung fu masters. What really made the show special was the sense of accomplishment and collaboration. Students embraced in hugs and high fives were everywhere!

Kung Fu isn’t just karate, it to is an art and a lesson in life and Chinese culture. Posted by Adam Controy at 10:38 PM 4 comments