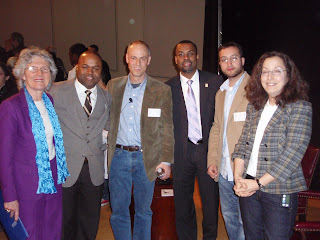 Friday Night Panel — 6pm-8pm — “What is Smart?” Introductions by Dr. Dennis Wint, CEO of The Franklin Institute opened the conversations creating the future.

David Warlick made a mindmap of this panel’s conversation. It is an enlightening synthesis of the conversation, forwarded to me by Jennifer Brinson.

* Happy Fernandez — President of the Moore College of Art
* Moderated by Dr. Frederic Bertley, Vice President of the Center for Innovation and Science Learning, The Franklin Institute
* David Shenk – Author of The Genius in All of Us, Data Smog and The End of Patience (and others)
* Prof. Eddie Glaude – William S. Tod Professor of Religion and African American Studies. Chair, Center for African American Studies, Princeton University
* Loren Brichter – CEO of atebits Software and developer of Tweetie Twitter software
* Prof. Martha Farah – Director, Center for Neuroscience & Society and Center for Cognitive Neuroscience, University of Pennsylvania. 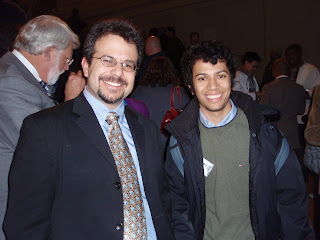 As this extraordinary conference begins in the Franklin Institute, Dr. Wink introduced the icon conference and remarked that the setting is fitting: the opportunity for passion, scientific inquiry, the ability to study science in the spirit of Franklin’s innovation. The Franklin Institute partners with Science Leadership Academy, which represents science, technology, and entrepreneurship and holds dear core values of inquiry, research, collaboration, presentation and reflection emphasized in all classes. A special thank you to Chris Lehmann, the organizing Principal behind the school and the conference.

Panel Topic: What is Smart? Each panelist has 5 minutes to present an answer and then questions are opened and the conversation begins.

We have been for years living under innate intelligence; what you got, you got. Binet-Simon test attempted to lift students up. Individual intelligence is not a fixed quantity; memory, judgment may be increased. The IQ test was co-opted from Binet, and we were still told that intelligence was a preloaded thing. But today we consider intelligence differently because of science; genes interact with their environment and are not “fixed.” So, the brain is responded to our environment with plasticity, but genes are turned off and on. A dynamic process is the creation of intelligence.

His second point states that intelligence is a set of competencies in development; it is a process and malleable. Understanding the malleability enables a mindset that can change intelligence and abilities, rather than depending on intelligence as connected and limited to a preset. Intelligence is in their (students) and our hands.

Smart is specialization, diving into something so deeply because you are passionate. More appropriate question is how do you make smart? Lehman was Brichter’s teacher in high school, more of a mentor enabling self-learning.

His answer: I have no idea (generated applause and laughter). Smart = genius, talent, intelligence, reasonableness, and so when we think about ordinary language use, we need to ask what is the context of the utterance to parse the word. Each use of “smart” creates a different connotation, so we need to begin to think about the context of the utterance being singled out.

If we are to cash out “smart” (Henry James and Dewey), it rejects a notion of reason for critical intelligence = inquiry. The idea of smart is made manifest in light of desired aims we want to achieve. Methods of science enables us to engage in scientific inquiry. Therefore, we need a contextual understanding of smart.

Second, we need to think about critical intelligence. If we say that a formulation is beautiful or a mathematical problem is elegant, we begin to understand smart.

Is there a single thing called smart? Is it a single or multiple thing. The controversy began in the 20th century regarding measuring cognitive abilities because the different ways we manifest our cognitive abilities is coined as “little g” to discuss a certain way of defining intelligence. The evidence for that is simple; people will push a button when they see a light flash on a screen. Little g = the single underlying thing that governs intelligence. Influenced by neuroscience,  we now think that intelligence does not derive from one underlying form of intelligence but is rather multiple or interconnected. Intelligence is a combination of different selectors (Gardner). On unitary v. multiple, Farah thinks it’s a matter of semantics. She is realistic in understanding there is a suite of abilities that IQ tests measure that is important for getting ahead in the modern world. These abilities are often important but certainly as educators we need to recognize there are many types of human abilities, and that we, as educators, need to nurture them.

As an educator with a democratic egalitarian approach to the classroom, she wants to draw everyone into the sense of successful so they can become successful good citizens. Is smart changing with the times? Fernandez recalls elementary school education, and how we were not allowed to know our IQ, so she thought smart were academically achieving students who took tests well. Smart was good, rule-following to get good grades from teachers. Fernandez feels that not too much has changed, i.e, bluebirds, red birds… and that students still feel they are or are not smart.

Smart is artistic smart, as in a visual arts college like Moore. Smart is how to see things in ways others do not see, and to be good visual problem solvers. Smart is athletic talent, being athletically smart. Some of the highest paid people in our society are athletically smart, but not necessarily good decision makers. These people have a natural talent, but practice a lot, driven almost. Athletes often do well in school, but the highly paid and valued stars had an extra canny ability to see the opening, make the winning shot, or score more points. Our championship athletes see the field and where to put their focus. Smart is political smarts. Dealing with the complexity of politics, you need people who can navigate the complex forces of political life.

What is missing is having young people and young adults be part of a team to solve really big problems, and as we look to the future, we need to consider this point.

1. How does the concept of smart mesh with the bombardment of technology that is moving at warp speed?

2. How as educators do we navigate a classroom of multiple intelligences?

3. Are we changing what we value as smart in a changing technological world?

4. Do schools mistake compliance with intelligence?

5. What was the definition prior to the written language, and how the the alphabet impact intelligence?

6. Is smart a neurological truth or a societal construct?

7. What was the role of an influential teacher in your life?