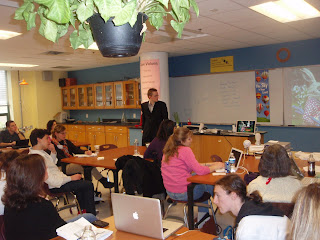 Christian Long believes that we are architects of the future and questions what does great teaching and learning look like? To demonstrate his point, he brought students Benedikt Kroll and Michael Nathman who experienced self teaching and learning through an interesting project: Falling Down the “Alice Project” Rabbit Hole as together students inverted traditional high school English research and writing. Long began by asking us why we chose this session over others, bringing the audience into the creative conversation. Long said his role was not to teach, not to lecture; rather he settled disputes, prodded people,worked as a moderator of learning. It was the kids who just kept going. 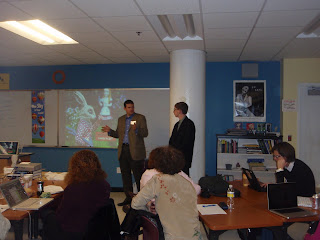 Long questions if his vision is relevant to their future when their primary goal is college. Alice is a story suspended below the ground. Long says that learning is about the “big mike.” Years ago, your story did not matter, go beyond the family bible unless you were a king or queen. Today, the game has changed and our roles as teachers have changed: ask great questions and DEMAND that they prove it in public because we must be relevant to the world. So, how do you have a big mike and relate to the world? Co-presenter Jason Kern supplied an answer later during the conversation: with his social network of approximately 100 followers and Long’s with 600+, you have a big mike because you have put yourself out there for the benefit of your students.

Long set up the project, gave them the “big picture,” asked the questions, and set the students loose with defined roles, but other than that, it was wide open. The teacher creates the project and guides students responsibly, asking questions that guide students in completing the project. It’s all about them and we make sure that everyone can go out there and do it.