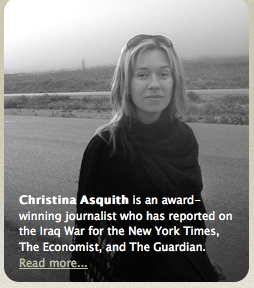 Halfway through our virtual day, we now go global with Christina Asquith, Author of Sisters in War: A Story of Love, Family and Survival in the New Iraq and her presentation, Cell Phones, Internet and Oprah: How the US Presence in Iraq Has Affected Women’s Lives. I thought you might find these Al Jezeera interviews fascinating and relative to today’s conference. Ms. Asquith is also the author of “The Emergency Teacher” (Skyhorse Press, 2007) , a non-fiction account of her year as a 6th grade teacher in low-income Philadelphia middle school. The book features Lance and Martha Perez Rougeux. 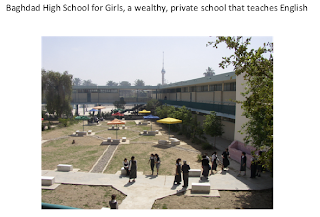 When the war in Iraq started, Asquith wondered why in 2003 we entered it and was even more curious how it would affect women and school systems. The New York Times sent her as a freelance journalist to Iraq, with her editor’s promise that if she could enter the country, her story would be published. She states that women in Iraq felt that the American presence would help women. Initially, Asquith thought women would be veiled, repressed, and not educated under Saddam. She learned, however, that he was not a strong Muslim but a strong Socialist who believed that women should have workplace opportunities.

It was not her only surprise. She said that places in Iraq were like stepping back 2000 years to Biblical times. However, journalists played a role in the economy, because they paid better, and after a few months working as Asquith’s driver, he was a rich man whose cab was now a BMW. But, that money allowed him to buy a second wife (they are allowed 4 if they can afford them). His use of money upset her, but she realized that the money we poured into Iraq often went to places we did not intend. 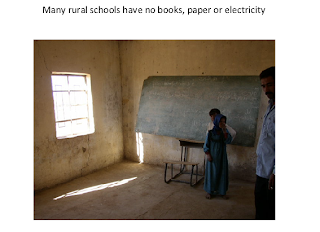 Although women benefited from life under Saddam in the 70s, she does not want to sugarcoat the impact. Over 70,000 men died in 2 wars, and women are left without husbands. Sanctions ultimately cut them off from the West, without medical supplies, Al Jazeera television, and uncontrolled media. Consequently, their news was fabricated and they missed the digital revolution because Saddam ruled with terror and an iron fist. Teachers were the worst paid women in Iraq, earning less than $5 a day. Except for the wealthy, whose school campus rivaled a fine American school, impoverished areas had schools without electricity and books. But Asquith noted that classroom control was impressive and perfect, unlike the inner-city school where she taught. 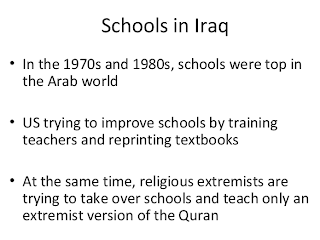 Women had many rights in Saddam’s 70 through 90, and encouraged girls in school. The schools were good in the 70s because Iraq was floating on oil, a rich Arab country planning highways across the desert and universities. But after the 90s, under sanctions, everything changed. No pencils, books. Filling this vacuum were the religious extremists who have come into the school system, threatening and sometimes killing headmasters, replacing them with religious extremists. All of the changes in 2003 began in the school system, where teachers were terrified. The new message: The West is evil, put Christianity in its place. Wage war against the evil West and Israel. That was the new education in Iraq, and the US did not anticipate it. Since then, strides have been made to make schools in Iraq apolitical and areligious. New teacher training has begun, with some access to latest teaching techniques that exceed rote and authority.

Group learning and approaching the blackboard is something not done in the past, as well as allowing students to stand to answer questions. Teachers fear that an egalitarian teaching style erodes authority, so they are slow to change. American educational programs had, however, little effect on Iraqi lives. But television changed life for Iraqi women, especially Oprah. These women were enthralled by television, but the most popular show was Oprah. Asquith was often asked, “Have you met Oprah?” 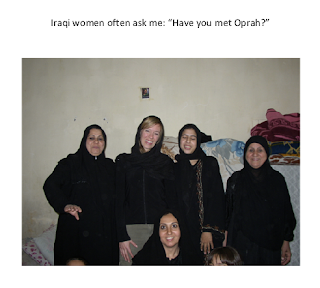 Women reacted to Oprah’s message of empowerment as her show discussed emotional issues that women experience world-wide. Rape is kept silent as a taboo in Iraq, and most women would not report it because the culture blames women for being victimized. Conservative families would consider murdering a raped women, calling it an honor killing because of the great shame of losing your virginity. This loss damages the family, so you show the village that you disapprove and restore family dignity and honor by the honor killing. Sometimes families would look for an aged, crippled, or poor man to marry her, but if that could not be found, usually a brother would have to kill his sister. The killing is legal because it restores the family’s honor. Currently, activists are working to change this horror.

Iraqi women were impressed with Oprah, but American shows like Friends, because women did not have to ask permission, had no fathers on the show, did have credit cards. Exposure to other lifestyles was the first step for Iraqi women to understand they could have a different life. 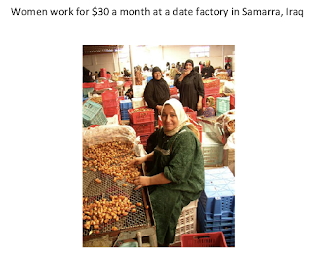 Will things ever change in the Middle East? Asquith believes that it has begun for women because of cell phones, the Internet, and television (Oprah). Marriages are arranged, and it is shameful for women to talk to men. Cell phones are changing all that. Calling and texting occurs; young men throw scraps of paper with their phone numbers at women, hoping they will call. Or they call and hope a woman will answer and talk to them. This new generation growing up with technology as the norm is changing women from no access to real access, and that all happened the week US troops arrived. Asquith believes that can only be a good thing. 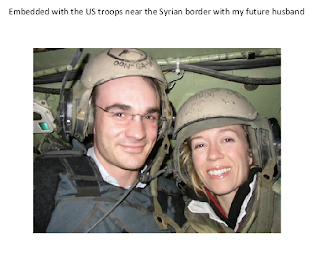 As a journalist in the country, Asquith planned on a two-month stay, and instead remained for two years. She met her husband there, an unexpected event. Iraq became very dangerous very quickly, so as a journalist she had to be concerned with radical religious groups began to take over the schools. They also tried to take over the government and the police. By 2004 and 2005, people Asquith knew were kidnapped and killed. When Asquith determined she was no longer safe in her hotel, she was invited to live with an Arab women. It was that move that prompted her to write the book about sisters in war. That taught her the impact of 140,000 American troops. By 2004, any woman on the street without a veil was in danger. Asquith ends at this point, because what became a very personal story she does not want to give away. I read her first book, and I can tell you I will purchase her second as an Audible book.