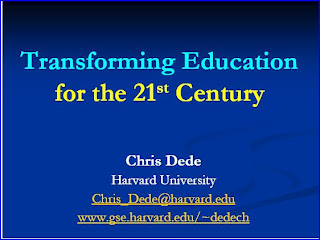 Day two in Waltham began with an air of anticipation for Christopher Dede, Timothy E. Wirth Professor in Learning Technologies at Harvard’s Graduate School of Education.
Today, there has been a shift in the knowledge and skills society values. As we all know, the traditional industrial model no longer serves the majority of the students. WHAT is it that our students need to know? WHAT will they be doing in the future? HOW can we predict what their careers will be? Dede says that there will only be two types of work in the future that is not performed by machines. The new division of labor for humans will include expert decision making and complex communications.

To illustrate the possibilities of the future, Dede shared a video of Microsoft’s vision of 2019 which included a life-sized telepresence with translation, digital ink, and complex visual interfaces. Today, we have the technology to do most of what was shown. The precursor to this future is Web 2.0, the world of creativity, collaboration, and sharing. Initially, people enter the playing field by sharing individually from the perspective of me: pictures, social media, bookmarks. It starts with the individual. As the ripples expand outward, people begin to meet and connect with like-minded individuals. Rich, long dialogues arise, shared meanings are negotiated leading to collaborative, social communities. 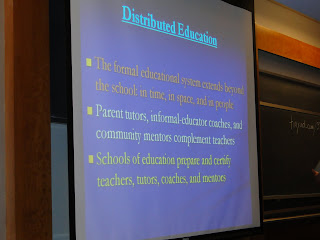 Schools need to move beyond the industrial model. One possibility for a new model is Distributed Education. Learning takes place in and outside of school through tutors, mentors, and coaches. School buildings as we know them would continue to exist as custodial care for children. They would cease to be the only places of learning. This model seems to fit best with the idea of “studying under someone.” The technical infrastructure exists today to do this. Educational visionaries and researchers have to work on creating scalable models vs. hot house models. We need to be able to replicate these on a large scale.

As we all know, today’s students have many mobile devices. Technology is ubiquitous and more is on the way. Computers are not being scaled down, rather cell phones are being enriched and expanded. Cell phones are almost always on, always with us, and have all day battery life. This technology, coupled with cloud computing will lead to an infrastructure shift. Schools must change. That is not an option. The option is whether there will be a good alternative or not.

Dede shared a video which we all found humorous. It shows a group of boys playing a virtual reality video game. As a parent, Dede was concerned about his son spending more time than he already does on gaming. As an educator, he can’t ignore the implications and possibilities gaming offers. http://www.youtube.com/watch?v=lY-MigUdhto 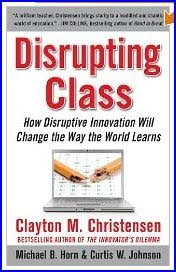 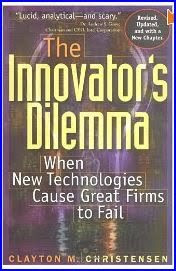 o out of business? Christensen posits that they use “best practices” to maximize the present BUT miss the future. His other book, Disrupting Class, offers is a new framework within which to think about creating positive, lasting change on the type of scale needed to be meaningful and suggestions on how to realize this.

Nearing the end of his talk, Dede quoted William Shakespeare in the Tempest “Do something rich and strange.” Dede suggests that we all do something rich and strange for our students and for education. It has to be better than discarding more than half of our students via a model more than a century old. He went on to say that educational reform is difficult and can at times be frustrating. Paraphrasing an old joke about marriage, he defined educational reform as the triumph of hope over experience.

Finally, we all must realize that it is not a question of will education change but when and how. Who will drive the changes? Dede left us with this closing thought. If plan is a noun, then we aren’t going anywhere. If however, plan is a verb, now that it is exciting.