Several PA DEN STARS were present and very productive at the KTI Summit 2010 at Bucknell University. Because I may overlook someone (not there, so do forgive–comment and I’ll add your name), I am including the KTI Flickr photostream. 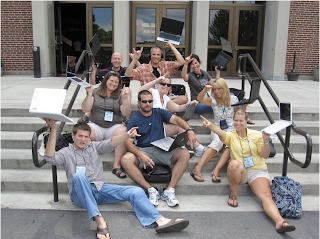 Some of the DEN STARS I do recognize include Chris Champion, Kristin Hokanson, both of whom were mentors, Jennifer Brinson, and a STAR Jen mentioned, Michele Hapich, who was also a mentor this year. From this very tech savvy group, including Brinson and Hapich, comes a fun video. Can you believe, they made this just for fun, on their own time, late in the PM.

The KTI sessions were recorded and archived. You can access any session by clicking on the session link, which will take you to the recording.