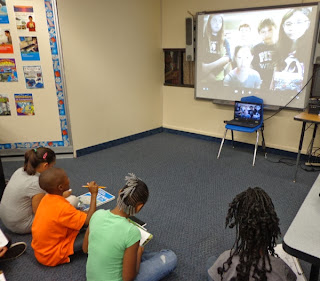 Recently I arranged a Mystery Skype for one of my 3rd grade classes.  A Mystery Skype is a game played over Skype where the classes take turns asking one another yes or no questions to try to guess the state, province, or city that the other class lives in.  We played with Mrs. Abernathy’s 5th grade class in Pennsylvania.

Our class had teams that had designated jobs during the Skype.  These jobs included:

Prior to the Skype, the class brainstormed some good questions to ask that would help them to quickly narrow down the opposing team’s location.  Some of their questions included:

After about 10 minutes of back and forth asking great questions, Mrs. Abernathy’s students guessed that we were from South Carolina (they got a big clue when a student said “y’all”).  But in the very next turn, our students guessed that they were from Pennsylvania!  So both teams guessed each other’s location in the same number of questions.  Next, Mrs. Abernathy’s class shared their class pets with us- some lizards, a few chinchillas (including an adorable baby), and a ferret.  That was a true highlight as we are not allowed classroom pets in our school district.

So, what did our students learn from the Mystery Skype?  Obviously they learned about geography, but more importantly they learned problem solving, communication skills, about the culture of another classroom in another part of the world and they learned that learning is fun!

Do you want to try a Mystery Skype?  Connect with other educators on the Skype in the Classroom- Mystery Skype page or search for the hashtag #mysteryskype on Twitter.