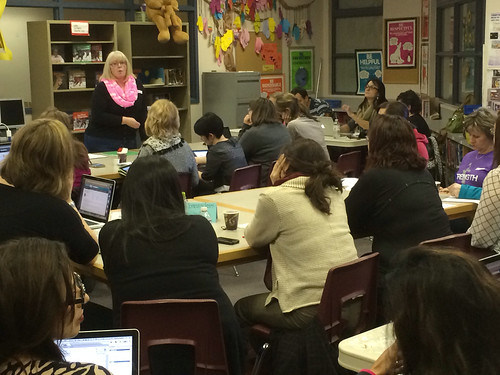 If you’re not aware of the DEN Ambassador program you should be.  Jannita Demian, the mastermind behind it all has put together an outstanding program that introduces people to the magic of Discovery Education and the DEN.  The way in which this brings people together over a few months is making significant differences for schools and districts across North America.

In Canada,  the Surrey School District as well as Halifax School Board both were participants for this winter. As they wrap up, they have seen tremendous increase both in usage but also in the ways in which these teachers are using Discovery Education and connecting with DEN. While Jannita has worked hard to make the program very easy to run, credit goes to those STARS who have taken up the mantle and made it happen in their districts.

Robyn Thiessen, Diana Williams, Vanessa Oliver and Iram Khan have all led the Surrey charge. Surrey has over 80 educators involved in 3 cohorts. The district has a never ending stream of innovative ideas and opportunities and the Ambassador program fits so well into their overall mission of engaging and empowering learners. In Halifax, Sandy McDougall continues his great work in advocating for the DEN. Sandy has been a STAR for quite some time and the Ambassador program has been a great way for Sandy to share more great things to their teachers. Sandy wrote a nice summary of his experience so far with his crew.

As you think about the idea of community within your district, I’d encourage to talk to Jannita and me about the DEN Ambassador program and if it might be a good fit for your teachers. Robyn, Diana, Vanessa, Iram and Sandy have been great ambassadors and leaders themselves in introducing them to the DEN. Be sure to follow them on twitter, leave a word of congratulations and talk to them about how to build community, they’re doing it!